Event notes: Our Future Together – the power of myth and vision

Event notes: Our Future Together – the power of myth and vision

by kathryn
in Events, Uncategorised
Comments

Whether you voted for Leave or Remain, the EU Referendum results have shown we need new ways to work together, to listen to each other, to discuss and debate and vote and take action.

With this in mind, we held an open event at our new offices on 27 June: Our Future Together, London. After the referendum result we wanted to bring people together and create a space for reflection.

We designed the agenda so that the discussions would be driven by those attending. Kicking off with a quick get to know you we then asked everyone what issues they would like to see addressed. 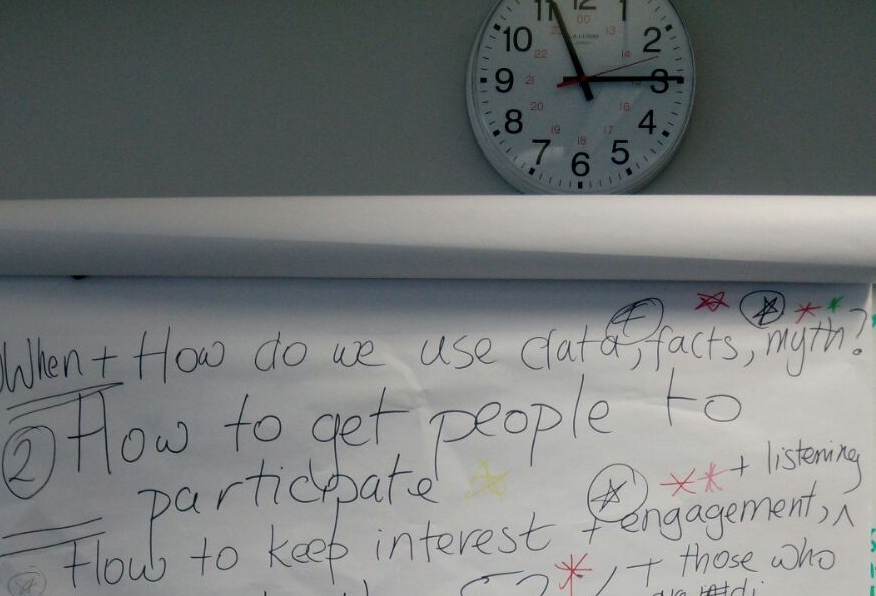 Everyone voted on the four issues they wanted most to discuss, which formed the rest of the evening. These ended up being:

This post will report on the use of facts.

The power of myth and vision overcomes facts and expertise

Data, facts and myth each played a significant role in the referendum campaigning on both sides. Summarising the two campaign approaches the participants thought:

The group agreed the Remain campaign failed to present a vision or aspiration and instead relied on facts and a management style of politics. Emotionally, there was little for voters to grab hold of. Little to visualise for the future they were being asked to decide upon.

As well as facts, the group said, the Remain campaign relied heavily on experts. This appears to have assumed that experts and large organisations were both known and respected. It appeared the strategy had little effect on Leave voters.

Facts from the Remain side also got lost in the rhetoric from the Leave campaign – for example ‘Turkey not joining for 10 years’. Noting that most of us lack literacy to understand the difference between data, facts (and what is a fact) and insights.

It was thought the media in the main did not challenge rhetoric presented as fact (from either side), such as the ‘£350 million a week to the EU’ claim by the Leave campaign.

The Leave campaign effectively used nostalgia, and the myth of a previously great Great Britain, using slogans such as ‘taking back control’.

The group discussed how different generations receive information, both in how it is presented and where. Younger generations expect and consume information online, bite sized, memes, via social media, shareable content; older generations consume media through mainstream sources, tv, radio, newspapers as well as online. The Leave campaign created memorable memes but the Remain campaign failed to do so, and relied on established forms of communication, even when using online media.

Whilst most of the conversation was analysis, it was strongly felt that the Advertising Standards Authority (or other body) should oversee political advertising.

This was just over two weeks ago and it already seems another world away. Since then, we’ve had a leaders of the Leave campaign resign despite winning, a political party leadership campaign has come and gone, we have a new woman pro-Remain prime minister, the Labour party has been thrown into disarray – a full box set of political drama.

None of which really reflects what people, those who voted, think or want. 4 million people petitioned for a second referendum, and many have marched for Europe. Many people are now happy and proud to claim they are European. But that doesn’t represent everyone.

If anything, the last few weeks have shown an even greater reason for Represent. To improve representation, so voices of agreement and disagreement an issue are made plain to representatives – councillors, assembly members, police commissioners, mayors, MPs and more.

The power of bringing people together.

And, yes, with everything that’s happened we’d like to run another event. This time: solutions.